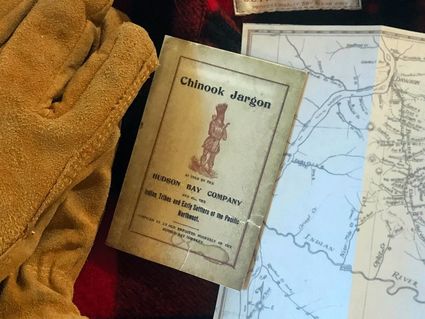 When you look up a word in the dictionary, do you end up spending half an hour looking up 20 other words? Psychologists have a clinical term for this. You could look it up.

If you forage for words in dictionaries, here's a little vade mecum you should have while you endure a long telephone hold with smarmy "Your call is very important to us" white lies and Kenny G looping.

It's just six pages long and printed small enough to fit in your pocket. The little dictionary's 32-word title is almost bigger than the book. I'll shorten it to the Chinook Jargon Pocket Dictionary.

By the time Jones wrote "The Lost Language of Seattle" in the 1970s, the old Gold Rush boys were gone and with them nostalgia for the Chinook Jargon they used in those days of yore in the Yukon.

The elderly ex-prospectors were some of the last to keep alive the trade language that had been used up and down the Pacific Coast by French-speaking voyageurs, English-speaking traders, and Native Americans throughout the 1800s. During the Gold Rush of the 1890s there were 100,000 gold hunters and indigenous peoples speaking it.

Chinook Jargon is technically a pidgin. Professors of linguistics use the term pidgin to refer to a grammatically simplified, blended language used by people who need to communicate but do not share a common language. There have been hundreds of now extinct pidgins spoken by European traders and their buyers and sellers in Asia, Africa and the Americas. Mobilian pidgin, for example, was used for 300 years among hundreds of tribes and when dealing with Europeans along the Gulf Coast. Its last speaker died in 1950.

When the Wilkes Expedition explored the South Sound in the spring and early summer of 1841 and built a base just south of present-day Steilacoom, American explorers learned the local lingua franca from their guides and food suppliers among the Nisqually and the Squaxin. The expedition's philologist, 20-year-old polyglot genius and Harvard dropout, Horatio Hale, mastered what his informants called "Chinook Wawa" in an afternoon. His tour de force report on the dozens of languages he studied on the expedition was published in 1846 with a long chapter on Chinook Jargon. While Capt. Wilkes was mapping the South Sound and naming geographical features and waterways after expedition members, he honored young Hale with nearby Hale Passage.

The Chinook Jargon Pocket Dictionary was printed for prospectors heading for the Yukon. Surviving copies are occasionally listed for sale in auctions, and collectors bid hundreds of dollars for them. The rest of us access the book online where the scanned copy from the University of Alberta library is well known to all the usual search engines. To read more from this article, visit: https://keypennews.org/stories/the-chinook-jargon-pocket-dictionary,3964?