By Pat Grubb
The Northern Light 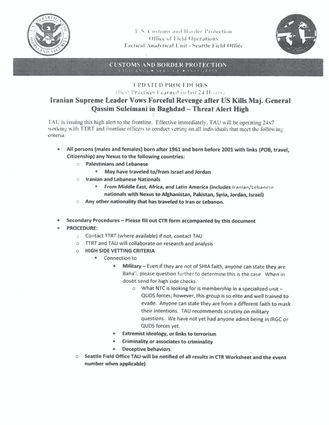 The CBP bulletin that instructed U.S. border agents to detain travelers who were born in Iran or met certain other criteria.

A joint press release from the Council on American Islamic Relations Washington (CAIR) and the Northwest Immigrant Rights Project (NWIRP) released November 17 alleges that local CBP leadership not only detained many more U.S. citizens and residents of Iranian backgrounds in a January 3-4 crackdown than previously known but subsequently attempted to cover up their actions.

In addition, the two organizations released hundreds of pages of emails that were subject of a Freedom of Information Act (FOIA) lawsuit that was heard last month in U.S. District Court for the Western District of Washington. In an October story in The Northern Light it was reported that Judge Ricardo S. Martinez in Seattle had ordered CBP on October 5 to turn over documents that CAIR sought in a January 8 FOIA request but had either not received or were redacted to the point of uselessness.

Following the January 3 killing of Iranian General Qassim Suleimani in a U.S. drone strike, CBP Seattle Field Office's tactical analytical unit issued a "high alert" stating "all persons (males and females) born after 1961 and born before 2001 with links (POB, travel, citizenship)" to Palestine, Lebanon or Iran were to be vetted with extra questioning on their entry to the U.S. from B.C. Consequently, numerous U.S. citizens and resident green card holders of Iranian heritage were detained and held for hours and subjected to enhanced questioning.

The documents released by the two organizations show that more than 250 people, many more than previously reported, had been detained at the border, some for as long as nine hours. Many of the travelers were returning from an Iranian pop star concert held in Vancouver. CBP had denied that a directive had been issued instructing border agents to detain people based on their country of origin.

The Northern Light was the first media outlet to publish the directive after a whistleblower dropped off a copy at the office of local Blaine immigration attorney Len Saunders who in turn supplied it to the newspaper. The Northern Light and writers Patrick Grubb and Jami Makan were awarded two first-place place awards in various news categories for its story coverage in the Washington News Publisher Association's 2020 Better Newspaper Awards.

NWIRP's release goes on to allege "an attempt by high-level CBP officials to mislead the public. Released emails demonstrate that after reporters began to inquire about the detention of Iranians at the Blaine Port of Entry, then-Acting CBP Commissioner Mark Morgan and other high-level officials signed off on a public statement claiming that "reports that CBP officers are detaining Iranian-Americans and refusing their entry in the U.S. solely because of their country of origin are false." The same statement that Mark Morgan authorized went on to claim that reports that the Department of Homeland Security/CBP has issued a related directive are also false."

The two organizations are still waiting for a decision by Judge Martinez on additional documents that have also been requested.

To read more from this article, visit: https://www.thenorthernlight.com/stories/cbp-leadership-allegedly-detained-more-iranian-travelers-than-thought-covered-up-actions,11949