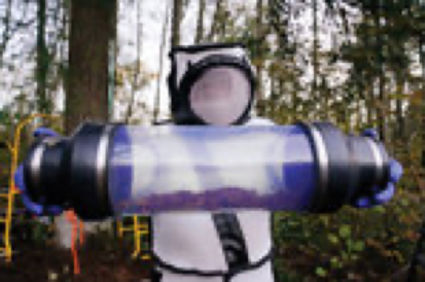 Sven Spichiger, Washington State Department of Agriculture (WSDA) managing entomologist, displays a canister of Asian giant hornets vacuumed from a nest in a tree behind him on October 24, east of Blaine. WSDA officials suspect there are two or three more Asian giant hornets nests in north Whatcom County.

Philip Bovenkamp was the first to arrive. At 4 a.m. he pulled his lawn chair 100 feet behind the yellow caution tape on his neighbor's east Blaine property. He drank black coffee in the 30-degree weather, and waited. It was eradication day.

A few neighbors trickling in became dozens as Washington State Department of Agriculture (WSDA) officials arrived around 5:30 a.m. to put on their eradication suits, thick enough to protect from the 6 millimeter stinger of the world's largest hornet. Face shields also protected the entomologists' eyes from spraying venom as the Blaine neighbors sat mere yards away, sipping coffee.

Before sunrise on October 24, these early risers would see four scientists vacuum 85 hornets from the first nest spotted in the U.S., located in a tree in a backyard off Burk Road. The nest was found October 22 after scientists successfully tracked one of four live hornets caught that week with a new, long-range radio tag. 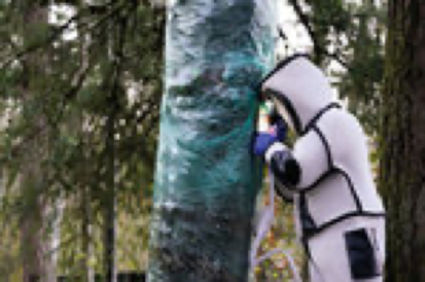 WSDA entomologist Chris Looney fills a tree cavity with carbon dioxide after vacuuming a nest of Asian giant hornets from inside it.

Although the invasive hornets venom is no more toxic than a honeybee's, the pests deliver multiple doses that can cause necrosis (the premature death of cells), WSDA managing entomologist Sven Spichiger said in a press conference the Monday following eradication. In Japan, the hornets are known to kill about 50 people per year.

This, paired with their 'slaughter' phase in fall, when a few hornets can decapitate around 30,000 honeybees, has dubbed them 'murder hornet.'

International headlines spotlighted east Blaine in what many consider its biggest claim to fame. From trending on Twitter to news stories that read, "Murder hornets that will haunt your nightmares," much of the U.S. has grappled with the idea of these killer hornets since they arrived in North America last year.

To read more from this article, visit: https://www.thenorthernlight.com/stories/inside-the-eradication-of-the-asian-giant-hornet-nest-east-of-blaine,11790