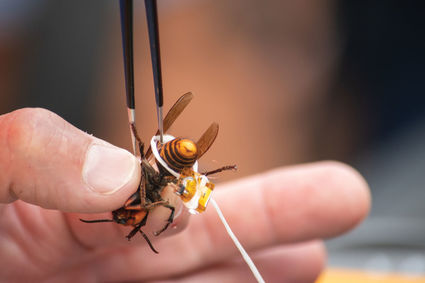 WSDA officials made their second attempt at tracking an Asian giant hornet on October 7. Scientists tracked the invasive species by tying a Bluetooth chip on the hornet with dental floss.

The attempt ultimately failed after researchers lost the radio signal but it was not without triumph, said Sven Spichiger, Washington State Department of Agriculture (WSDA) managing entomologist during an October 12 news conference.

"Everything is progressing as much as possible," Spichiger said. "I'm pretty hopeful we'll have a nest and perform an eradication"

Urgency comes as the hornets enter the 'slaughter' phase, where the hornets can destroy an entire bee colony to feed their young. By the end of October, hornets will start mating and venture out to create new colonies by next spring.

The live hornet was caught on October 5 at the same east Blaine location as the first tracking attempt, near Burk Road. Agency officials tried tracking the hornet the next day but had to start over on October 7 due to a technology malfunction on the tracking chip.

Scientists waited until fog cleared after noon to ensure they could see the hornet as it took off. They tied a tracking device onto the hornet's abdomen with dental floss, instead of glue, which didn't dry fast enough during the first tracking attempt and rendered that hornet immobile.

European counterparts, who use a similar device to track the Asian hornet, a different species, suggested the Washington scientists place the hornet on a higher surface for flight. The hornet launched off an apple tree and landed on a few nearby trees before landing near dense Himalayan blackberry bushes. The scientists then lost track of the hornet when it quickly flew into trees.

To read more from this article, visit https://www.thenorthernlight.com/stories/wsda-attempts-to-track-second-asian-giant-hornet,11712