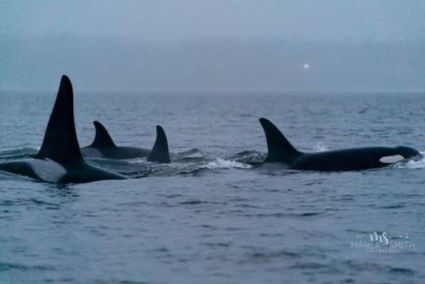 Orcas from the J, K and L pods, seen here in January, are currently returning to the area. Two of the pods were seen this week near the San Juan Islands and Point no Point.

A second new calf was born into the J Pod in the past week or so, according to the Center for Whale Research.

If the new calf is healthy, the center will assign a designation, much like the one its mother J41 holds, once the pod returns to the Salish Sea.

Approximately 40% of newborn calves do not survive longer than a few weeks.

The Pacific Whale Watch Association spotted the new calf Sept. 24, according to a statement from the Center for Whale Research.

Talia Goodyear and Lea Vanderwiel, naturalists aboard Orca Spirit Adventures, told the center their vessel was present during the birth, according to the statement.

"It was an emotional time as we processed what was happening in front of us," Vanderwiel said in the Center for Whale Research news release. "It took a few minutes to realize what was actually happening, but then it was pure excitement realizing that it was a birth and the baby was very alive and boisterous."

Center field staff member Mark Malleson encountered J Pod later that day near Sheringham Point, B.C., but because they were spread out and foraging, he could not locate J41 or the new calf before dark, according to the statement.

In early September, a calf designated as J57 was born. Its mother is J35, also known as Tahlequah, who made national news in 2018 after her calf died and the grieving mother pushed and carried it for about 17 days and 1,000 miles.