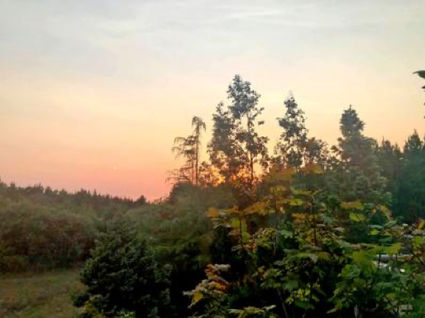 Smoke haze carried to the coast by an easterly wind this week reminded some residents of the slash-burning era that wound down decades ago. There was a smell of distant wildfire smoke Tuesday morning in southwest Pacific County and our air quality was rated as moderate. Raymond's air quality index was an unhealthy 162 on Monday. North along the coast, and at several locations around Puget Sound, air was rated Tuesday as unhealthy or "unhealthy for sensitive groups." The state's leading weather expert foresees little chance for significantly wetter, cooler weather this month.

Washington State Climatologist Nick Bond says the almanac's forecasts for our region are about as good as flipping a coin. Or worse.

"They claim that they're 80% accurate. I have serious doubts about that," Bond said. "I actually looked at their forecasts from some years ago - 13 winters, their monthly precipitation totals, and average temperatures relative to normal for Western Washington and Western Oregon. And I was not convinced that they had much skill in their forecasts. In fact, the temperature forecasts were no better than flipping a coin, and precipitation forecasts were actually a little bit worse. So take a bucket of salt."

The almanac's longstanding prediction formula is a secret but is said to rely on factors including a mathematical and astronomical formula, sunspot activity, the tides and planetary alignment. Analyses have pegged the almanac's accuracy at about 52% - slightly accurate than Punxsutawney Phil, the famed groundhog said to predict six more weeks of winter or an early spring, depending on whether or not his handlers say he sees his shadow on Feb. 2.

Farmers place much greater stock in the long-term forecasts made by meteorologists, which they find have become far more accurate and sophisticated in recent years.

"You're kind of working science against folklore and guesses," an Idaho farmer told a reporter.

Bond summarized what meteorologists see coming this winter. To read more from this article, visit https://www.chinookobserver.com/news/local/washington-state-climatologist-says-farmers-almanac-winter-forecast-is-way-off/article_932ebc8a-f15f-11ea-ab48-fb2ad7d05ddc.html