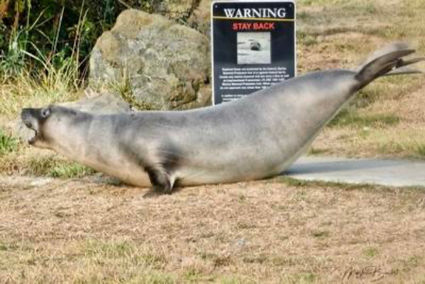 Elsie Mae, the juvenile northern elephant seal who has spent much of this year on Skyline’s beaches, looks “absolutely beautiful” with the new outer layer of skin and fur that grew after her molt this summer, Marine Mammal Stranding Network volunteer Phil Sorensen said Sept. 25.

“She sparkles in the sunshine,” he said.

Elsie Mae may have grown out of her old skin, but she hasn’t shed her curiosity about people. She recently cozied up to a car, Stranding Network veterinarian Dr. Stephanie Norman said Sept. 25.

The seal reportedly scooted across a grassy area to get closer to some people walking by, and a construction worker had to use a rubber traffic cone to compel her to move off the road.

It’s a continuation of earlier behavior that concerns those who track her behavior. In her short life, Elsie Mae has crashed wedding parties on Orcas Island and Cama Beach, had to be ushered off the Old Salt’s parking lot, flopped onto a beachfront deck in Skyline, and tried to climb into an RV.

“She’s an absolute rascal,” Sorensen said. “The greatest concern is, she literally has very little fear of people.”

Elsie Mae’s curiosity about people compelled Norman and Sorensen to issue this reminder to wildlife watchers: Keep your distance and keep pets away. The caution is needed to prevent injury to people, pets or the marine mammal. At 2 ½ years old, Elsie Mae weighs 600 pounds, and will top out at 1,000 as an adult, Sorenson said. For her own safety, Elsie Mae needs to maintain her wildness and keep from becoming too comfortable with people.

There’s yet another reason to keep a distance: All northern elephant seals are protected under the federal Marine Mammal Protection Act.

To read more from this article, visit https://www.goskagit.com/anacortes/news/stranding-network-to-wildlife-watchers-keep-your-distance/article_24f78b62-031f-11eb-8820-53c767ee42af.html