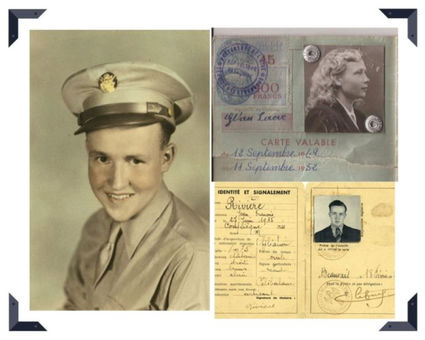 A collage of photos shows (clockwise from left): Dean Tate in his Air Corps uniform during World War II; Godelieve Van Laere, the girl who saved Dean Tate's life after his plane was shot down over Nazi-occupied France; and documents that helped shuttle the lieutenant bombardier out of France and back to the safety of Allied forces during the war. Dean Tate's daughter, Susan Tate Ankeny, of Camas, tells the story of her father's rescue in her new book, The Girl and the Bombardier.

"I had heard the story about Dad being shot down over France so often I knew it by heart. Or at least I thought I did," Tate Ankeny, 58, writes in her newly published book, The Girl and the Bombardier: A True Story of Resistance and Rescue in Nazi-Occupied France. "While most men never talked about their war experiences, my dad told his story of being rescued by the French Resistance to anyone who would listen."

Dean Tate had written a partial memoir of his WWII experience, but Tate Ankeny said her father, a lifelong educator and former school district superintendent, lived more in the present than the past. Instead of finishing the memoir himself, he turned his writing and notes over to his daughter.

After her father's death in 2003, Tate Ankeny would learn there were stories about her father that she had never heard - stories best told by the people who lived them.

Dean Tate never returned to France after the war, but he had corresponded with Godelieve Van Laere, the French girl who saved his life after he bailed from his burning B-17 plane.

"She was 17 ... and was having her hair done when she saw him in the sky," Tate Ankeny recalls of Van Laere's introduction to her father. "She went to find him. He had fallen in a church yard. They carried him to a little barn across the road, to hide him."

But the Nazis also had seen Dean Tate falling from the sky. To protect the young bombardier, Van Laere would have to convince her parents to hide him in their own home.

"It was late enough in the war that people were just being shot in front of their homes for helping the Allies," Tate Ankeny says. "So it was very dangerous to keep the men in a house."

Along with two other airmen that had been shot down by the Nazis, Dean Tate found refuge in a variety of locations during those weeks with the French Resistance network: in a pile of straw inside a barn, in an upstairs bedroom of a house, in an old bunker.