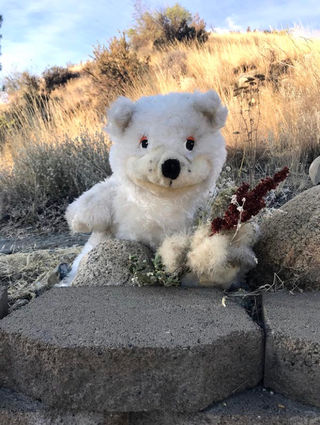 A friendly bear on Second Avenue, one of at least two known COVID bears in town, greeted walkers and cyclists on their way to Twisp River Road.

Bear sightings in the valley are not uncommon this time of year. In fact, bear hunting season has been open since August and many people have reported seeing bears on hikes, along roads, or munching on old orchard trees.

However, a recent uptick in sightings of what appears to be a new species or sub-type of bear has emerged in the valley since the pandemic hit. Two new resident bears in Twisp have been reported. First, a small brown bear has been reported between Twisp Park and Halterman's Hole along the riverbank next to a tree, visible to river floaters. Another, white in color, seems to have taken residence along Second Avenue atop the concrete masonry block wall adjacent to the sidewalk, up from the new licensing office.

The typical black bear in the valley can range from cinnamon blond to black, with all shades of brown in between. These new bears exhibit all colors of the rainbow. As recently reported across the state, grizzlies aren't really welcome yet and these new bears do not exhibit the shoulder hump nor concave facial profile that distinguishes grizzlies. Furthermore, the new bears are much smaller than most black bear cubs and could be considered miniatures. It is unknown if they are cubs, full-grown, or male or female. They are quite cute, though some have reported they think their staring eyes are a little creepy - as it appears they don't have eyelids.