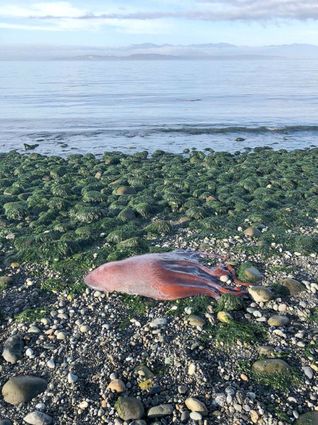 A sea creature found on the beach at Ebey's Landing may be a Haliphron atlanticus, or seven-armed octopus, scientists have theorized.

The tentacles of a deep-sea creature that washed up on a Whidbey beach have reached across the country.

Scientists from universities and research centers as far away as the Smithsonian Institution have identified it as a rare seven-armed octopus, although the conclusion isn't unanimous.

Admirals Cove resident Ron Newberry sent the photo to the Whidbey News-Times, explaining he found the creature during low tide the morning of Aug. 29 on the beach at Ebey's Landing.

"I didn't know for sure it was an octopus," Newberry said in an email. "It's pretty common to see large jellyfish washed up on shore. Not knowing what it was, I definitely didn't want to touch it. It also was obvious it was dead."

He guessed the unknown creature was about 3.5 feet long. Newberry posted a photo of the sea creature on the Whidbey Camano Land Trust social media pages, where it garnered a lot of attention. He said an engineer from the Seattle Aquarium thought it looked like a Dumbo octopus from the deep sea.

The News-Times sent the pictures to a University of Washington biology professor who also wasn't sure what it was. That scientist sent it to some other biologists, who sent them to a few more.

"I confess my first thought was 'something from outer space,' so deep water offshore sounds similar," said Dr. Megan Dethier, director of University of Washington Friday Harbor Labs. "(It) certainly doesn't look like any of our local species."

She sent the photos to some colleagues. Eventually, scientists from across the country were sucked into the challenge, including researchers at the Monterey Bay Aquarium Research Institute in California, the National Oceanic and Atmospheric Administration and the Smithsonian Institution.

To read more from this article, visit https://www.whidbeynewstimes.com/life/possible-seven-armed-octopus-found-on-beach-at-ebeys-landing/