What sank the Alumaweld off Edmonds Marina? 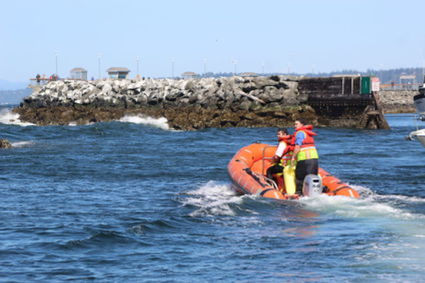 A Washington State Ferry rescue boat leaves the Edmonds Marina after dropping off a passenger from a sunken boat.

The real story of a boat sinking on Labor Day off the Edmonds coast is more complicated than it first appeared.

Incomplete information from rescue officials about a "17-foot aluminum boat" capsizing in choppy and dangerous waters – throwing five people and two small dogs into frigid Puget Sound – led to ridicule from a few Facebook posters, who chided the boat's owner for taking an unsafe boat out in such conditions.

Linda Norris-Hoggarth wants to set the record straight. She's the wife of Dennis Hoggarth, whose boat it was that sank.

Importantly, the boat wasn't 17 feet. It wasn't 19 feet, as later reported. And it was not a dinghy, as some online posters suggested. The boat was a 20-foot Alumaweld Blackhawk, a welded aluminum boat with a steering column, bimini top, and an outboard motor on an extended transom.

She said she was hesitant about putting her name in the paper – she wants to put the focus on rescuers – but she has commented on the Beacon's Facebook page about the incident, and called the Beacon's office to tell her story.

Even though she wasn't onboard, she said she knows exactly what happened, thanks to her husband and his fishing partner.

According to South County Fire spokesperson Leslie Hynes, a call came in at about 1:15 p.m. Sept. 7 that a boat had sunk about 400 yards offshore from the Offleash Area Edmonds dog park on waters that started out calm but quickly turned windy and treacherous.

Here's what happened next, according to Norris-Hoggarth.

Dennis Norris had checked marine conditions before setting out from his Camano Island home, and departed from the Everett Marina for a fishing trip, heading south. On board was his daughter and her husband and their 14- and 22-year-old daughters, who brought two small dogs along with them.

Norris gauged the weather conditions when the winds started whipping, and decided to return to Everett.

"He is very much aware," Norris-Hoggarth said about her husband, who has 55 years of experience on the water. But he couldn't do anything with what came next.

"He turned to (head back to the marina), but a big wave came in and hit, and before that was done, another one hit. They said it was a freak wave. They fought it; they weren't just sitting out there."

Luckily, another boater came upon Norris and his four passengers (and the two dogs) floating with their life vests on. "My husband says he never allows anyone on his boat without a life vest," Norris-Hoggarth said.

All were taken to the Edmonds Marina, then to Swedish Edmonds hospital.

To read more from this article, visit https://www.edmondsbeacon.com/photos/big/23734/12