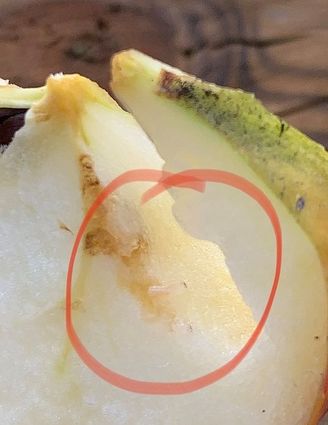 Douglas County officials posted this photo of an apple infested with apple maggot larvae. The apple is reportedly one of many brought into Eastern Washington by Governor Jay Inslee, which Sen. Judy Warnick said Wednesday likely was in violation of state law, during recent stops to fire-stricken towns in the region.

OLYMPIA - A local lawmaker is calling for an investigation and possible penalties after recent reports that Governor Jay Inslee brought apple-maggot-infested fruit to Eastern Washington during his visit to towns impacted by wildfires, allegedly breaking state law in the process.

Douglas County officials reported Wednesday that they are scrambling to locate all of the donated apples before the pest can spread through the region, potentially harming the production of apples, the state's premier export crop.

During visits to the residents of Malden, which lost many buildings in the recent fires, Bridgeport, and a retirement home in Omak, the governor brought a box of apples picked from a tree in the lawn of the governor's mansion. This had already sparked some degree of backlash from residents, who criticized the decision for the state's chief executive to bring apples to a disaster-stricken agricultural community in need of supplies.

"I think the governor was trying to do what he thought would be helpful, but to take apples into a prime apple-growing area, it might have been a better gesture to bring other supplies to folks who have lost their homes or other things to the fire," said Sen. Judy Warnick, R-Moses Lake, in an interview.

To read more from this article, visit https://columbiabasinherald.com/news/2020/sep/17/local-lawmaker-calls-investigation-after-inslee-re/