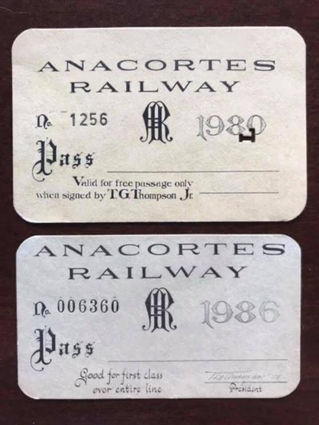 Anacortes Railway tickets from 1980 and 1986. A Lincoln, California vintage restorer and an Anacortes non-profit are competing to acquire and operate the train.

Getting the Tommy Thompson Train operational - whether in Anacortes or in a city near Sacramento, California - is proving to be no easy challenge.

A designer and vintage restorer – who is also the voice of Mickey Mouse for film – proposes moving the Tommy Thompson Train, aka Anacortes Railway, to Lincoln, California, northeast of Sacramento, and operating it as an amusement ride.

But there are a lot of moving pieces to the proposal. The family doesn't yet own the land. It's not known when the train would be in operation. And the proposal is news to officials in Lincoln. "Unfortunately, I couldn't find any information related to the Tommy Thompson Train, nor did any other staff members that I spoke to," Lincoln City Clerk Gwen Scanlon wrote to the American in response to an inquiry by the newspaper.

Those loose ends may prompt the Anacortes City Council to give another look at the proposal. The issue: if proposed buyer Bret Iwan's plans fall through, the city could end up paying the costs of bringing the train back.

"It's a discussion we'll need to have at the council level," Mayor Laurie Gere said Monday.

Meanwhile, the Anacortes Railway Group has proposed operating the train between Ben Root Skate Park and 34th Street using right of way on the Tommy Thompson Trail. But group president Dave Sem said Monday his nonprofit's current priority would be to create a proper, climate-controlled display space for the train, in keeping with an agreement the city and the Thompson family signed in 2012 when the family donated the train to the city.

Sem said the group is not backing away from the idea of operating the train. "It looks like there are too many headwinds" threatening that proposal, Sem said, and he thinks the best first step would be to abide by the conditions of the 2012 agreement.

The City Council is expected to discuss the train's fate - selling the train to Iwan or to the Anacortes Railway Group - on Sept. 28. Iwan's proposal has the blessing of the Thompson family, which donated the train to the city eight years ago but revised its agreement in December to allow the city to sell the train. The train is stored in the train barn at The Depot Arts Center, which was originally a Great Northern Train depot.

To read more from this article, visit https://www.goskagit.com/anacortes/news/charting-new-course-for-tommy-thompson-train-proving-to-be-daunting-task/article_ba9ecef8-f827-11ea-8f44-37f61412c586.html