By Jeff Clemens
For the Observer 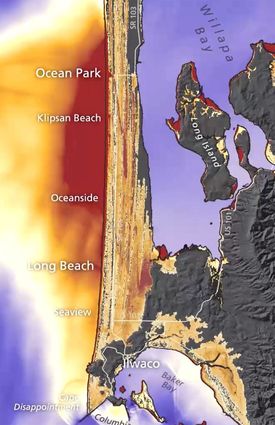 A screen capture shows a small portion of a video simulation of how a megathrust earthquake-generated series of tsunamis will impact the south Washington coast.

PACIFIC COUNTY - What happens in the minutes and hours after the Cascadia Subduction Zone ruptures along the state's outer coast is shown in alarming new simulations released Aug. 26 by geologists at the Washington State Department of Natural Resources.

These scientific models in the form of free online videos provide a scary preview of towering ripples in the ocean coming ashore one after another following a magnitude 9.0 earthquake. Yet they also offer hope, in form of more time to escape for some. And they build a case for constructing a series of evacuation towers in vulnerable areas.

"Tsunamis have struck Washington's coast many times over our geologic history. It's a question of when, not if, the next one will hit," Commissioner of Public Lands Hilary Franz said. "These videos are designed to give the communities that would be most impacted by tsunamis a visualization of what areas are likely to face the most damage so they can make sure their residents, businesses and institutions are secure and resilient."

The latest simulations zero in on the Long Beach Peninsula and other areas of Pacific County, along with Grays Harbor.

Washington residents are accustomed to expecting a series of tsunamis after a Cascadia Subduction Zone (CSZ) rupture. The most recent occurred in January 1700, a fact established by University of Washington Geologist Brian Atwater about 25 years ago, partly based on evidence found in Pacific County. Followup studies found these megathrust quakes happen every 300 to 600 years. There have been about 40 earthquakes on the subduction zone in the last 10,000 years.

Still, our evolving understanding of this threat holds surprises, according to the DNR simulation and Pacific County Emergency Management Agency Director Scott McDougall.

"We know the [initial] wave will reach the Long Beach area and outer coast in 20 minutes," Director McDougall stated. "It is going to go up the river to Chinook in 30 minutes, and it takes a bit longer to back around into Baker Bay near Ilwaco in about 40 minutes. Tokeland's about 35 minutes. South Bend is about 90 minutes, and Bay Center is about 40 minutes."

McDougall continued, "those waves are going to continue to be generated for about 12 hours. The first wave is not going to be the highest. If you watch the simulation, you will see that the higher waves come later in the process."

"At North Cove about 27 feet," McDougall said. "At Ocean Park about 36 feet. At Long Beach, about 36 feet. It also provided some inundation depths for previously dry land. Pacific Pines State Park in Ocean Park, about 42 feet. About 10 feet at South Bend High School."

McDougall continued, "there was one that surprised me at the shoreline beyond 201st Lane on the peninsula - kind of the Klipsan Beach area. There is some shoreline there that could see the water get as high as 53 feet."

While DNR advises that the videos are not designed to aid "site-specific decision-making," they take many factors into account to provide the best estimate of tsunami flooding along the coast. Things like the tide cycle and undersea terrain will affect exactly what happens.

It's also important to note that although the tsunamis generate the most attention, the megathrust quake that sets them off will be destructive in its own right, dwarfing anything experienced in the Pacific Northwest in generations. Even cities far from the CSZ like Seattle and Portland are expected to suffer serious damage.

The simulation does show that some residents might have something they didn't believe they had before - time. Due to the event's length, the landscape through which the seawater travels and when levels rise has become more transparent. Maximum inundation is expected to take nearly four to five hours after the earthquake.

To read more from this article, visit at https://www.chinookobserver.com/news/local/picturing-calamity-new-simulations-predict-tsunami-impacts/article_eb416d16-f13a-11ea-97c9-d3b405f354b5.html