The captain of history: From Rhode Island to Port Townsend, racing yacht Martha can't be beat 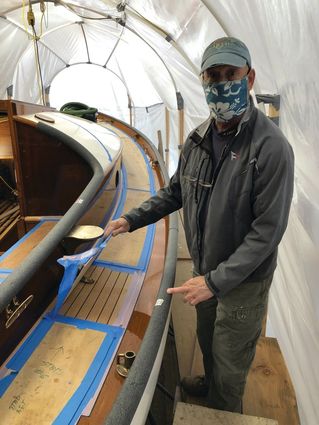 If you change all the wood in a boat, is it still the same boat? The Theseus Paradox, a question dating back to ancient Greece, generates a laugh from Robert d'Arcy, captain of the schooner Martha.

The captain, who joined the Schooner Martha Foundation when it began in 1996, is also the project manager of all restoration projects on the wooden vessel, which happen each winter when the racing season ends for the 84-foot schooner.

"She's been restored, but she's still Martha," d'Arcy said. "She was built as a racing yacht, and as a foundation we decided to honor that and to utilize her as she was intended to be used."

The captain, too, has gone through many changes in his life, but has maintained an unmatched level of passion for wooden yachts and their history.

As for an actual answer to the paradox, d'Arcy thinks it's all a matter of scale. In the case of Martha, which is more than 100 years old, as long as pieces are added bit by bit over the century, the boat remains the same.

A LIFE AT SEA

Sitting below the deck of Martha, hanging mugs of blue and green cast rainbows onto the mahogany cabin.

The space is large, for a boat, but filled with the necessities of life onboard. Sleeping bags, pillows, and laptop chargers sit amongst finely-bound books on the art of sailing. The watch schedule from the last race hangs, framed, in a place where it can be easily read even by tired morning eyes.

D'Arcy seems as natural a feature of the boat as the wood itself, a well-loved blue hat bearing the sailing vessel's name slung low over his eyes.

D'Arcy describes himself as "young enough to still be here but old enough to have seen the old world a bit." Born in Rhode Island in 1957, d'Arcy is a fourth-generation boat builder. Although he hadn't heard of Martha growing up, he was at the "epicenter" of American yachting and familiar with and a fan of her designer, Bowdoin B. Crowninshield.

In fact, once d'Arcy joined the Schooner Martha Foundation, he made it a personal goal to bring more awareness to Crowninsheild's designs, whom he called an "unsung hero of yacht design."

"I wanted to make her strong and safe, tune her up and clean her up to be a testament to his design and prove its efficiency," d'Arcy said.

Before connecting with Martha, he worked at the Mystic Seaport Museum in Connecticut, the nation's largest maritime museum, as a restoration carpenter and did historical research. Throughout his education, both formally and on the job, d'Arcy's appreciation for the craft grew.

"I really like the design, form, and function of a yacht. What a beautiful creation," he said. "It's in the water, it has to absorb tremendous strains and loads, but it's beautiful."

After being steeped in the history of American yachting, d'Arcy took a momentary break from wooden boats.

He turned to other forms of adventure, including windsurfing, skiing, and mountain biking. But he just couldn't stay away from the allure of the elegant wooden craft.

"I ended up back in big boats, so I guess it's my choice," d'Arcy said.

Walking down the docks at the Point Hudson Marina, it would be difficult for the untrained eye to pick out the oldest boat. Martha, with a gleaming white and teal paint job and sparkling decks, doesn't look like a day over 50. It is only her design, with subtle touches signature to the naval architect who created it, that signals to passers-by that the schooner has spent 113 years in the water.

It's easier to describe what's original on the boat than what has been restored, d'Arcy laughed. The keel timber, laid in late 1906 or early 1907, is Martha's "primary backbone" and has been in the water for 113 years.

Much of the deck framing and all but one of the stringers are just as old, as is the cabin and helm. D'Arcy estimates about 10 percent of the fabric is from the early 1900s, including West Coast fir, oak framing from back east, and Douglas fir planks that came from Blakely Harbor.

Martha was built in San Francisco in late 1906 and finished in 1907. Her first owner, J.R. Hanify, ran one of the West Coast's largest lumber yards, and was a fan of luxury boats. There was an avid racing clique in San Francisco at the time, and Hanify found several other competitive yachtsmen who admired the schooner, which he named after his wife, Martha.

Competing vessels on the West Coast were different from the polished, glamorous yachts of the east, d'Arcy said.

"It was new out here, rugged, rough. There wasn't a whole lot of difference between the workboat and the yacht," he explained. "Glam wasn't in; people were practical."

In fact, the sole difference was whether or not the boat was used for commerce, since the design between the two groups could be identical.

Martha has changed over the years, following the evolution of schooner yacht design. There were many changes in her rigging and sail composition as sail design improved.

D'Arcy called her staysail composition the "ultimate schooner rig," but aspects of the design are always changeable.

In 1968, owner Edgar Kaiser brought her to Washington, and there she stayed.

To read more from this article, visit https://www.ptleader.com/stories/the-captain-of-historyfrom-rhode-island-to-port-townsend-racing-yacht-martha-cant-be-beat,71001?