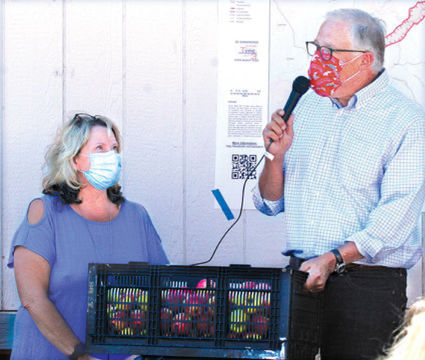 That was the message Gov. Jay Inslee gave reporters during a brief appearance about noon today, Thursday, Sept. 10, in one of two cities nearly wiped out by the Babbs Fire.

That press conference followed a presentation he made to town residents and leaders only minutes before, a presentation in which he requested all media be excluded.

Inslee arrived in a black SUV via Pine City-Malden Road, passing numerous "Culp for Governor" and "Trump" signs, both political opponents of the governor.

He also passed a still-smoldering grain elevator a few miles away in Pine City, as well as numerous burned out cars and destroyed homes and buildings.

As the governor, a Democrat from Bainbridge Island, neared and his representatives ushered reporters to a staging area a block away, locals gathered in a vacant field near Mayor Chris Ferrell's still-standing home to hear the governor and Congresswoman Cathy McMorris Rodgers, a Spokane Republican.

Only 27 of the city's 130 structures remained standing.

To read more from this article, visit https://www.cheneyfreepress.com/story/2020/09/10/news/gov-inslee-says-wildfires-should-be-called-climate-fires/27165.html