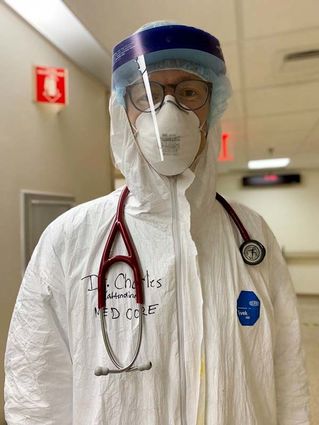 Dr. Jesse Charles, suited up and ready for patients.

This is an update I wrote to my family and friends about my time serving in Brooklyn. I was hesitant to post this (on Facebook). It is an intensely personal reflection on my experiences. But then an ER doc in New York committed suicide, and I couldn't stop thinking about her suffering and the suffering that her family now has to endure. We call health care workers heroes, and then put them in impossible positions. These experiences are traumatic, and in her case, the trauma was complete.

I'm writing to give an update and to share some of my experiences and reflections on my time serving here in Brooklyn [at Brooklyn Hospital Center]. I struggled to find the words to capture my experience, and so I just started writing my memories. The following is mostly a stream of consciousness, so I apologize if it runs on. Where there are names, they are made up for privacy.

Mr. Pullman is a 78-year-old man. I met him when I switched from serving in the Emergency Department to the "general medicine floors" caring for patients admitted to the hospital with COVID.

On rounds that first morning, he seemed unconscious, but could raise his eyebrows and almost whisper, indicating that he was in there somewhere. It was clear from his sunken eyes that he was wasting away. Through his oxygen mask I could see that his mouth was dry, his teeth were caked in some sort of yellowish resin, his tongue cracked.

I placed my hand on his face, and leaned in close and spoke his name, in the hopes that he would come to. He moved his eyebrows, attempted to whisper, but could not manage. I learned later that day that he and his wife had contracted the virus at church. They were both admitted at the same time. He had been doing well at the time, on oxygen but breathing easily. Shortly after, his wife died. After that he stopped eating and drinking. I was told that he had no other family.

After rounds I went into his room to clean his mouth out and try to get him to drink. I spoon-fed him sips of water and protein shake, but he was too weak, and couldn't stop from choking on the water. He tried to tell me something, but I could not make it out. My heart suspected he wanted to fight no longer. That night I lost sleep thinking of him, edging towards a death that would end in a mass unmarked grave in Potter's Field, where for centuries they have buried the bodies of the vast unclaimed in this city.

When I saw him the next morning his mouth was wet, but he was unresponsive. I asked around and discovered that he did, in fact, have children. I called and learned to my dismay that no one had contacted them in over a week. At that time, their mother had just died. They didn't get to see her or talk to her before she passed. They could not mourn as a family. Their mother was dead, their father was in the hospital, on oxygen and doing well, but alone. For a while they kept in touch through the phone. But then he stopped answering. A man of few words, they presumed he was just sick of talking. They tried to get through but couldn't get any answers.The next they heard was from me, saying that he was very weak, and likely to die. They did not know that he had lost his spirit when his wife died. I talked to his daughter and two sons, one after the other delivering the news. Each conversation included the same desperate plea: Can I see him? No. That would put you and the community at risk.

We agreed that we needed to put a feeding tube in to get him nutrition and hydration. Somewhere in that lost week he had become severely dehydrated, his blood excessively salty, and his kidneys had gone into failure. The only hope was to feed him through a tube into his stomach, and continue to give him fluid through an IV. The next morning he could raise his eyebrows and open his eyes slightly, but could not focus them. He was more responsive than he had been in days I took the opportunity to arrange a video chat with his children. Not knowing if this would be the last. Each time giving them the same warning: "I want to prepare you for what you're about to see. Your father looks very different than the last time you saw him. There is a tube in his nose, that is what feeds him, the mask is what is delivering his oxygen. He may not focus his eyes but I think he can hear you."

"On the morning he walked out of the hospital, he took me by surprise by breaking into tears and hugging me. My face shield pressed against my face. My body slumped as though I was in the arms of my father. He's the only person I've hugged other than my partner in over a month. I needed it just as much as he did."

His daughter cried freely at this moment, but when I told his son, he broke down sobbing. I watched him shake his head to fight the tears to show a stoic face to his father. I watched as the son, not wanting his father to see his tears through the phone, buried his emotions deeper. It is a cruel fate that as men are raised, they are stripped of the capacity to freely show their pain. Each time I showed them their father, there was a pause, and then "Hi, Papi." Each time Mr. Pullman raised his eyebrows, but did not focus his eyes. He tried to speak when he heard his daughter.

Each moment felt so inadequate to me. So unjust. But his daughter told me that she had been praying for this opportunity all week. His son, crying, said that he couldn't find the words to thank me. I told him my father was near the same age, and that I couldn't imagine being in his position, my mother dead, and my father inaccessible. At this he broke down again.

In my time here I hadn't cried until now, writing these words, remembering this moment.