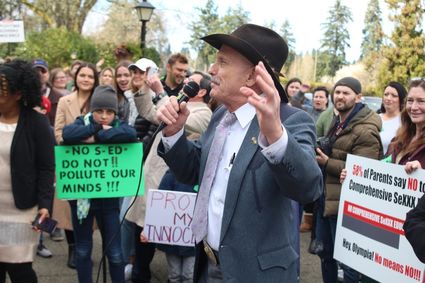 Rep. Tom Dent, R-Moses Lake, tells the crowd he thinks the sex education effort will rob children of their innocence.

Despite the governor's warning to avoid crowds in the wake of the coronavirus, hundreds of concerned parents and residents converged on the Capitol Wednesday to protest Saturday's passage of a law that mandates comprehensive sex education from kindergarten through 12th grade in the state of Washington.

The Informed Parents of Washington organized the protest in an effort to urge Gov. Jay Inslee to veto the controversial Senate Bill 5395, which was passed by the Democratic majorities in both the Senate and House and now awaits his signature.

Parents and children held signs urging the governor to veto the bill.

Many Republican senators and representatives showed up to speak against the sex education bill.

Rep. Tom Dent, R-Moses Lake, said he had issues with the "pornographic" nature of the curriculum, which he said students will be subjected to as early as kindergarten.

"Why do we want to take their innocence?" Dent asked the crowd.

The bill includes provisions to allow districts to adopt their own sexual education curriculum, but Dent said developing a curriculum can be very costly for a school district.

Some parents, like Karen Larsen from Auburn, said they feel like this legislation is an overreach of the state government.

Larsen said that, while she does not agree with the content of the curriculum, her biggest issue is that the policy usurps local control over education and curricula.

Sen. Tim Sheldon, D-Potlatch, also spoke to the crowd, claiming he was the only Democrat to vote against the bill.

Representatives such as Jesse Young, R-Gig Harbor, and Jim Walsh, R-Aberdeen, urged voters to remember their frustrations with the Democratically-controlled Legislature come election time in November.

After a series of speeches from advocates and legislators, the throng of protestors crowded the halls outside the governor's office as they waited to leave written comments with Inslee's staff.