Jinkins is first woman Speaker of the House 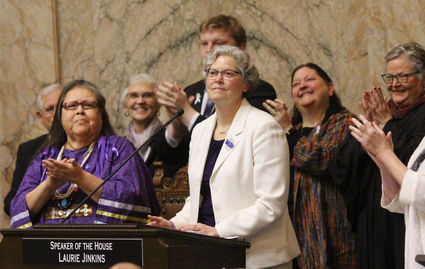 Rep. Laurie Jinkins, D-Tacoma, is applauded by her colleagues as she becomes the first woman in Washington State history to be sworn in as Speaker of the House on Monday, Jan. 13.

State Rep. Laurie Jinkins, D-Tacoma on Jan. 13 was applauded by colleagues as she became the first woman and first gay woman to serve as Speaker of the Washington House of Representatives.

"Today represents another step toward inclusion, toward more seats at the table," Jinkins said.

Several women in the Legislature wore white to Remember the the 100th birthday of women's suffrage.